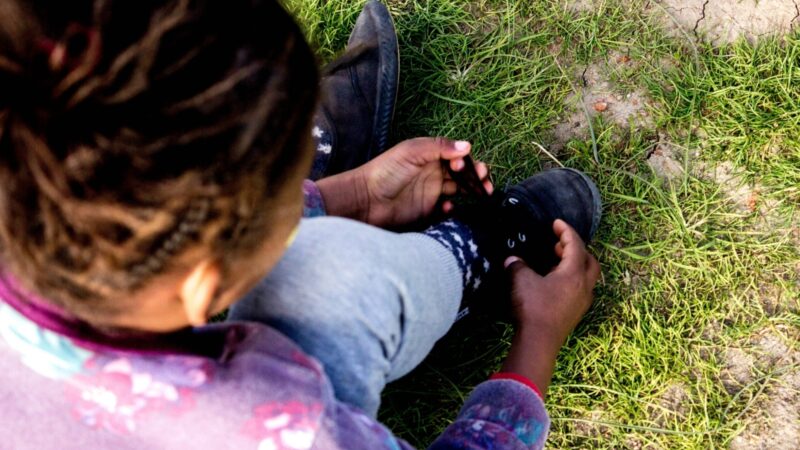 Children and youth who reside at the Children’s Home Society’s Arthur N. Gustke Shelter will benefit from new shoes thanks to a recent $500 grant to the agency from the Robert E. Fouss Memorial Fund. The Gustke Shelter provides short-term housing and emergency care for youth in crisis.

Robert E. Fouss was born in Illinois in 1920 and then moved later with his family to Marietta, Ohio. He worked for Keystone Shoe store in Marietta, before serving his country during World War II. After the war, Fouss returned to Keystone Shoe Store and eventually became the manager of Fort Pitt Shoes on Market Street in Parkersburg. Fort Pitt shoes quickly became a Parkersburg favorite for the latest in affordable styles and customer service. In 1972, Fort Pitt Shoes moved to Grand Central Mall and became Ford Shoes.

In 1982, Fouss retired from the shoe business and enjoyed his retirement years. After his death in 1995, his son, Rob Fouss, said people started telling him stories about how his dad had provided them with shoes through trades for fresh eggs, bacon, or other arrangements when they could not afford to pay. These stories touched the family deeply. Rob Fouss and his sister Pamela (Fouss) Wenmoth created the Robert E. Fouss Memorial Fund to provide a permanent resource to continue their father’s legacy of supporting children in need by provided them with shoes. Since its establishment, hundreds of children throughout the community have received shoes in the name of their father.

“My father made sure that any kids who came into his store who needed shoes left with a new pair on their feet,” Rob Fouss said. “Our family is proud and humbled to be able to carry on this tradition each year by providing children in our community with new shoes. Children at the Gustke Shelter are facing a time of crisis and real need; by providing them with new shoes, we also aim to provide them with hope and to let them now that the community cares.”

Donations to the Robert E. Fouss Memorial Fund are always welcome and will help the fund continue to provide shoes to children in our local area. Donations can be sent to the PACF, P.O. Box 1762, Parkersburg, WV, 26102 or made online at www.pacfwv.com/donate. For more information about the fund, contact PACF at 304-428-4438.