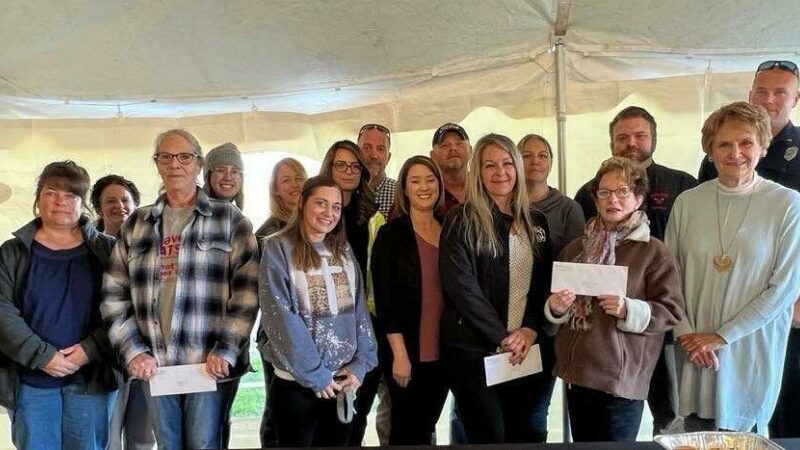 The Fund for Ravenswood is a charitable fund of the Parkersburg Area Community Foundation (PACF), a nationally certified community foundation founded in 1963. Jackson County is among the eleven counties in PACF’s regional service area.

Created in 2019, The Fund for Ravenswood’s mission is “to work together to make Ravenswood better by supporting programs, projects and initiatives that lead toward the vision of a better future for all residents.”

The Fund for Ravenswood announced its 2022 fall grant awards on Nov. 22, at a program at the Great Bend Museum at the riverfront park in Ravenswood. PACF’s Executive Director and a citizen of Ravenswood, Judy Sjostedt Ritchie, presented the grants totaling $105,500.

“The Fund’s founders are very thankful for the positive energy and good things that are happening in Ravenswood because of the hard work of many of the grantee organizations here today. This charitable fund was created to strengthen the momentum and to provide encouragement,” said Sjostedt Ritchie. She added, “The Fund for Ravenswood was formed to build a socially vibrant and economically robust community, where people are healthy, respectful and inclusive of others. Ravenswood is a great community and we want people to have opportunities to thrive and to build a life for their families here.”

The Fund made its first grant in 2021 with an award of $4,000 that supported the City of Ravenswood’s public WIFI project. In late December 2021, the Fund received a substantial gift commitment from the S. Douglas Ritchie family of Ravenswood that now enables the Fund to award up to $200,000 each year. Grants are formally considered twice each year via the Parkersburg Area Community Foundation’s online Community Action Grants Program process. If an opportunity is time-sensitive or of an emergency nature, grant seekers may contact PACF to discuss it, but generally, larger requests must use the online grant application process.

The most important requirement for consideration for a grant is that an applicant organization show significant benefit for the citizens of Ravenswood. Grants are considered in five broad areas of life: Quality of Life Improvement; Vibrant Economy-Downtown Support; Healthy Lifestyles; Public Safety; and Workplace Readiness.

Along with the grants issued in spring totaling $104,672, and some off-cycle support for other projects totaling $3,750; nearly $214,000 has been distributed from the Fund for Ravenswood to date for a wide variety of community and economic development projects.

As a public charitable fund managed by the Parkersburg Area Community Foundation, other citizens who believe in supporting this vision of a better Ravenswood, are encouraged to support the Fund for Ravenswood. Gifts to the Fund are fully tax-deductible to the extent allowed by law. Gifts may be made online or mailed to the PACF and gifts may be made in honor of, or in memory of, special people. To learn more, please call the PACF at 304-428-4438.