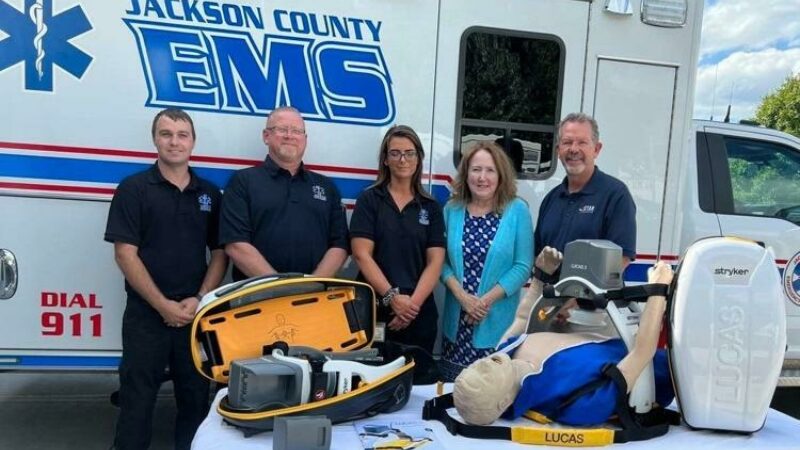 by Suzette Lowe FOR JACKSON NEWSPAPERS

When the Fund for Ravenswood was established with the Parkersburg Area Community Foundation (PACF), its mission was simple. Established by Doug Ritchie in 2019, the public charitable fund ‘works together to make Ravenswood better by supporting programs, projects and initiatives that lead toward the vision of a better future for all residents.’ The focus areas would be quality of life improvement, vibrant economy-downtown support, healthy lifestyles, public safety and workplace readiness.

In May 2021, several area organizations received grants from the fund. One of those was the Jackson County Emergency Medical Services (EMS). The $14,757 awarded was to purchase an additional portable CPR machine for the Ravenswood station. At the time, there was only one in the county at the Ripley center. Since then, the Jackson County Commission approved funds to purchase a device for the Kenna station.

Recently three representatives from PACF were on hand as the new device arrived. Executive Director Judy [Sjostedt] Ritchie, Associate Director Fred Rader and advisor Doug Ritchie were given a demonstration of the life-saving device. The Lucas 3, manufactured by the Stryker company, is an automated chest compression system. Quite simply, it performs CPR on those suffering heart attacks.

“To have this device on hand in our ambulances can make the odds of surviving a heart incident much better,” EMS Director Troy Bain said.

One of the greatest advantages of Lucas, according to Bain, is the ability to have the chest compression continue as the paramedics transport the patient down a flight of stairs.

“When our people are administering CPR, it stops as we go down the stairs because the pressure and consistency can’t be maintained,” he explained. “It is a literal life saver to be able to continue non-stop.”

The Lucas 3 contains the newest technology, allowing detailed reports to be generated which can be used in training and to update WVU Jackson General Hospital.

“One other great thing is that all standards of the American Heart Association can be updated easily,” Makiah Ratliff, paramedic and shift commander, said.

Someone constantly monitors Lucas so that if the patient is stabilized, the compressions can be stopped.

“The one that we’ve had here since 2017 has saved or prolonged countless lives,” Bain said. “We fully expect this one to do the same.”

Judy Ritchie said this device fits the intentions of The Fund for Ravenswood in many ways, particularly in public safety.

“To see this in action is very impressive and we are very happy to have been given the opportunity to provide such an important addition,” she said.

Bain made a point to also recognize the Ritchie family for additional support EMS has received. Several paramedics have received their training because of scholarships provided by the Dr. David Monroe Ritchie Memorial Fund. The fund was established in 2001 in memory of Dr. Ritchie after he passed away in a car accident in 1999. Students pursuing degrees in nursing or certification as paramedics or emergency medical technicians in Jackson or Kanawha Counties are eligible to apply.

“We currently have three getting their certifications because of these scholarships,” Bain said. “We’ve had several in the past.”

As for The Fund for Ravenwood, both Doug Ritchie and the PACF hope that others interested in the betterment of Ravenswood will consider donating, thus enabling more projects to receive assistance.